What it’s all about

CommsChampion Ecosystem is about easy and compile-time configurable implementation of binary communication protocols using C++11 programming language, with main focus on embedded systems (including bare-metal ones).

Although the primary purpose of the CommsChampion Ecosystem is to help with the implementation of the binary communication protocols, it can easily be used to encode / decode any binary data as well.

Both C++ and embedded systems are first class citizens of the CommsChampion Ecosystem. However, other high level programming languages are also supported via generation of the bindings (glue code) using SWIG and emscripten.

Almost every electronic device/component nowadays has to be able to communicate to other devices, components, or outside world over some I/O link. Such communication is implemented using various communication protocols, which are notorious for requiring a significant amount of boilerplate code to be written. The implementation of these protocols can be a tedious, time consuming and error-prone process. Therefore, there is a growing tendency among developers to use third party code generators for data (de)serialization. Usually such tools receive description of the protocol data structures in separate source file(s) with a custom grammar, and generate appropriate (de)serialization code and necessary abstractions to access the data.

The main problem with the existing tools is that their major purpose is data structures serialization and/or facilitation of remote procedure calls (RPC). The binary data layout and how the transferred data is going to be used is of much lesser importance. Such tools focus on speed of data serialization and I/O link transfer rather than on safe handling of malformed data, compile time customization needed by various embedded systems and significantly reducing amount of boilerplate code, which needs to be written to integrate generated code into the product’s code base.

The binary communication protocols, which may serve as an API or control interface of the device, on the other hand, require different approach. Their specification puts major emphasis on binary data layout, what values are being transferred (data units, scaling factor, special values, etc…) and how the other end is expected to behave on certain values (what values are considered to be valid and how to behave on reception of invalid values). It requires having some extra meta-information attached to described data structures, which is not sent over I/O link, but still needs to be accessible in the generated code. The existing tools either don’t have means to specify such meta-information (other than in comments), or don’t know what to do with it when provided. As the result the developer still has to write a significant amount of boilerplate code in order to integrate the generated serialization focused code to be used in binary communication protocol handling. There is an article called Communication is more than just serialization which provides more detailed examples on the mentioned shortcomings.

All of the available schema based binary protocols generation solutions have multiple limitations, such as inability to specify binary data layout or customize data structures used in the generated code. They also are unable to provide and/or customize polymorphic interfaces to allow implementation of common code that can work for all the message objects. Most available tools don’t provide an ability to customize and/or use multiple transport frames for the same messages, but transferred over different I/O links. Few (if any) allow injection of manually written code snippets in case the generated code is incomplete and/or incorrect.

The generalization is hard. As the result many embedded C++ developers still have to manually implement required communication protocol rather than relying on the existing tools for code generation.

CommsChampion Ecosystem is there it resolve all the problems listed above. Its main purpose is to allow quick and easy implementation of a custom binary protocol, which may already been defined by a third party, without enforcing any particular data encoding and/or layout. The main philosophy here is that most communication protocols are very similar, but many may have a couple of special nuances, which make it difficult to have “out of the box” complete solution. The ecosystem allows injection of manually written code snippets, which may replace and/or complement any functionality provided by default.

There are multiple parts to the CommsChampion Ecosystem. Some are independent, some require other ones to be used as well.

The COMMS library was developed to allow quick and easy manual implementation of the protocol definition. However, over the years it grew with features and accumulated multiple nuances to be remembered when defining a new protocol. In order to simplify protocol definition work, a separate toolset, called commsdsl, has been developed. It allows much easier and simpler definition of the protocol, using schema files written in XML based domain specific language, called CommsDSL. The commsdsl repository provides the following sub-components: 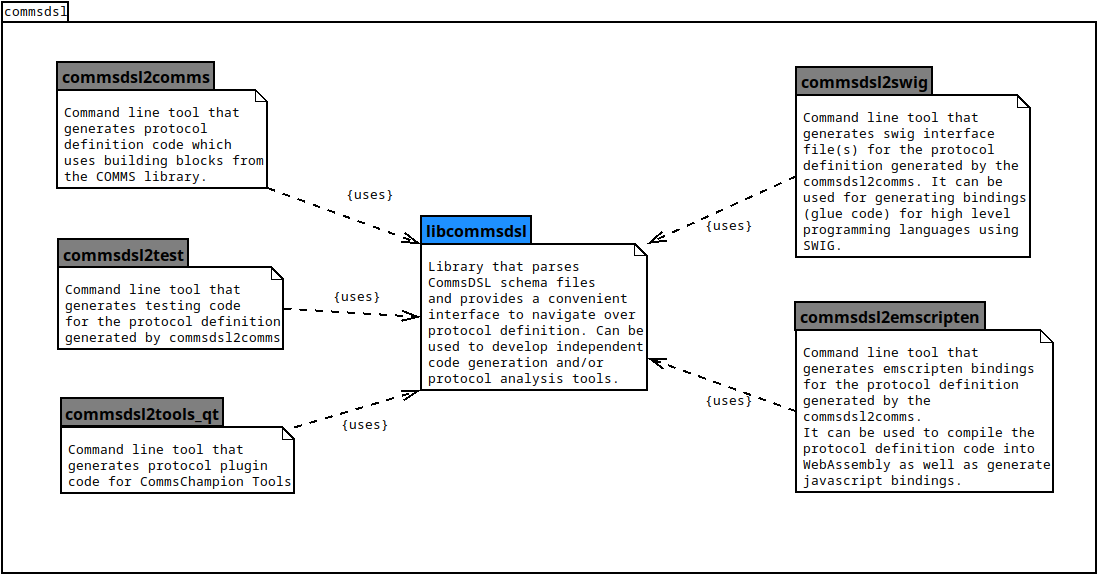 The process of the code generation is depicted below. 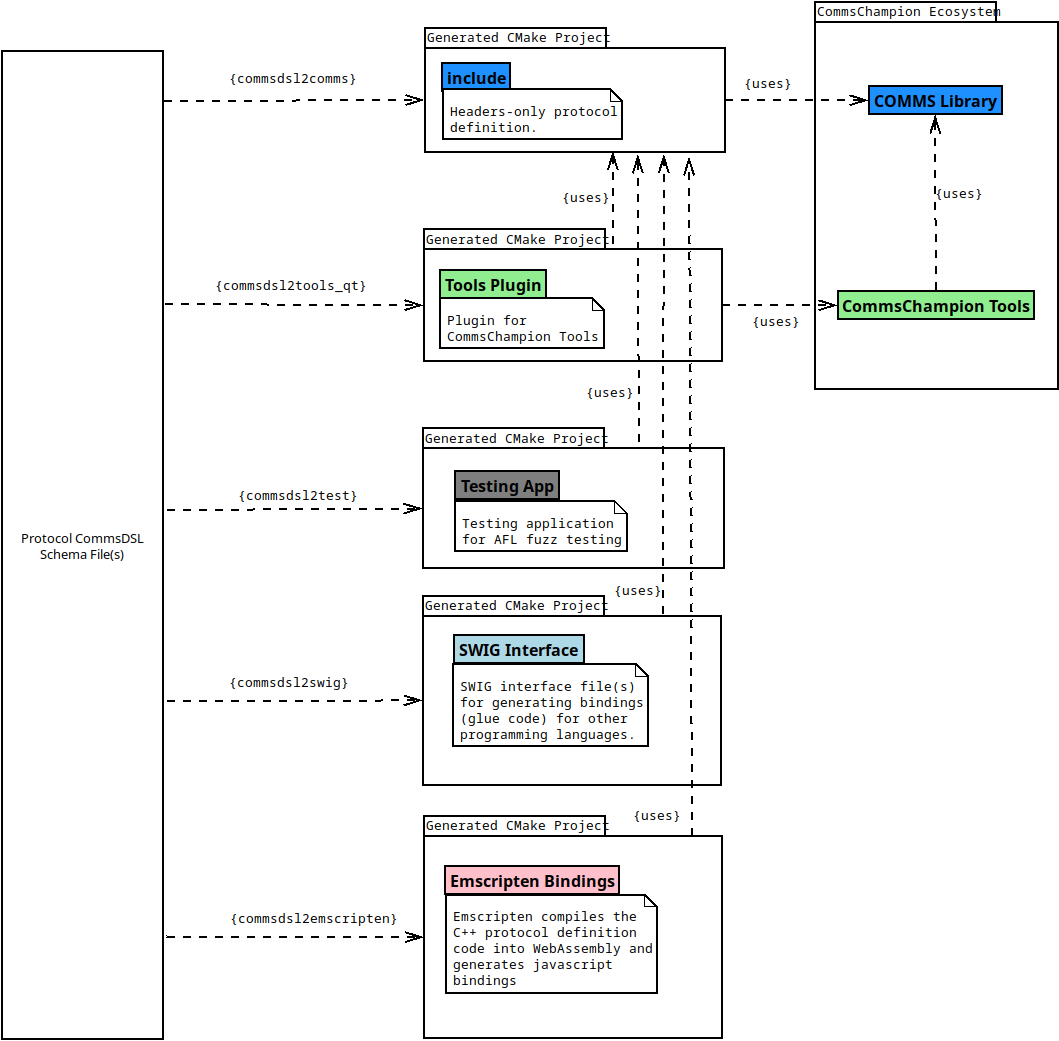 At first, it is highly recommended to read through the available tutorials which cover the most common aspects of the CommsDSL, code generation, COMMS library and their integration.

As the second stage in the learning process it is recommended to read through the CommsDSL specification and COMMS library documentation. The latter contains two major tutorial pages:

The third stage is to review the available protocol definitions and use them as reference and/or as a testing ground.

Other useful resources are:

For any personal issue, question or request please send an e-mail.

For any technical question that may be of interest to any other developer as well please consider opening an issue on relevant project on github.

It is also recommended to grab RSS feed of the blog to keep yourself updated with latest news and articles.

The CommsChampion Ecosystem is already quite feature rich and satisfies the needs of most available protocols. It’s not in a constant active development. Introduction of new features now is on-request basis. If you think that the latest versions of the available components don’t satisfy needs of your use case, please get in touch to get an estimation of when the new functionality is going to be introduced.

For any open and freely available standard protocol you implement using the CommsChampion Ecosystem please consider to open source your definition and implement it as a separate project, use any of the already defined protocols as a template. Please also consider having it hosted as a project inside CommsChampion Ecosystem github organization. You’ll be assigned as an owner and active maintainer of the project.